WinSparkle is an easy-to-use software update library for Windows developers. It's Open Source, available under the permissive MIT license.

WinSparkle is a heavily (to the point of being its almost-port) inspired by the Sparkle framework originally by Andy Matuschak that became the de facto standard for software updates on macOS. 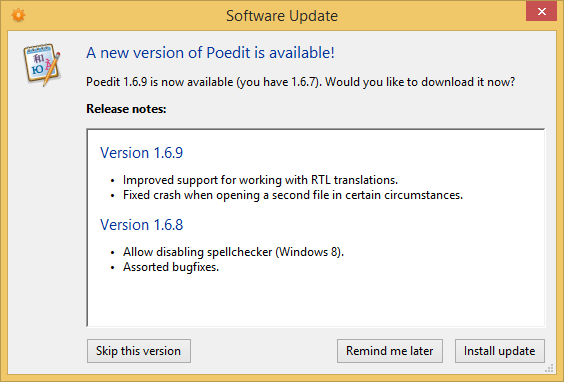 It shares Sparkle's aesthetics and goals:

Easy to develop with

The library is easy to use and distribute. WinSparkle.dll doesn't have any additional dependencies (not even dynamic CRT), all you have to include with your app is this file. And its API is in C and can be used from any language.

WinSparkle's UI uses native Windows controls and looks well in any application. And it runs in a separate thread, so you don't have to worry about compatibility with your GUI toolkit of choice (be it wxWidgets, Qt, WinForms, WPF, ...).